Finally it's time for me to share some updates in our house.  The living room area was definitely one of the first rooms I started working on after we moved in.  It got a lot of attention quickly, and while I definitely still have a "to-do" list of things to get accomplished in here, it's coming along quite nicely.  I'll start you out with lovely {maybe not so lovely}, before pictures... 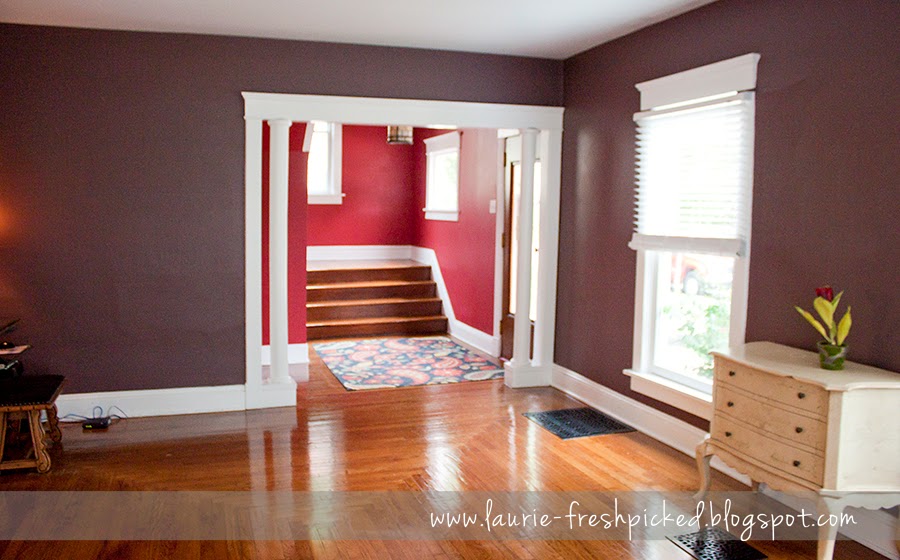 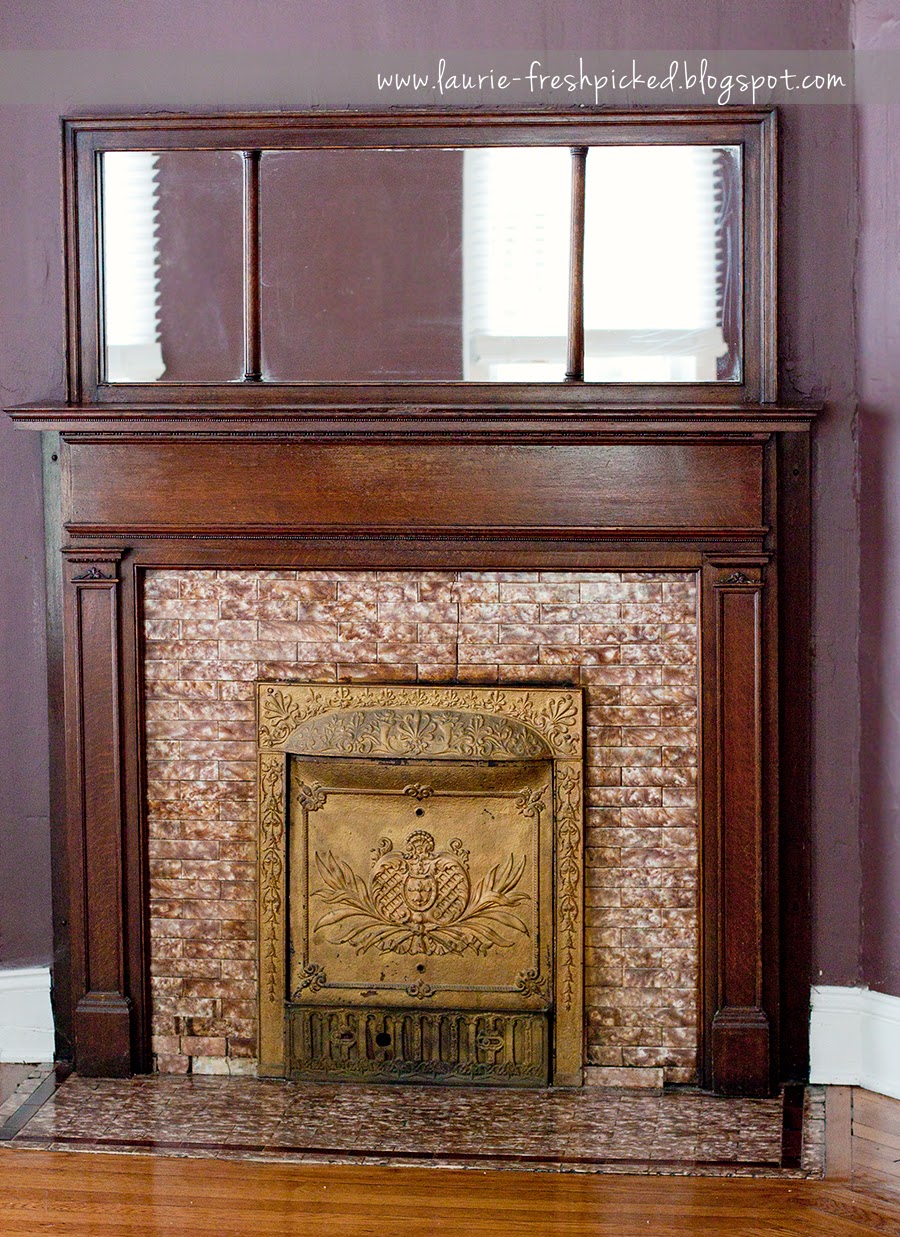 And here is what the living room looks like now... 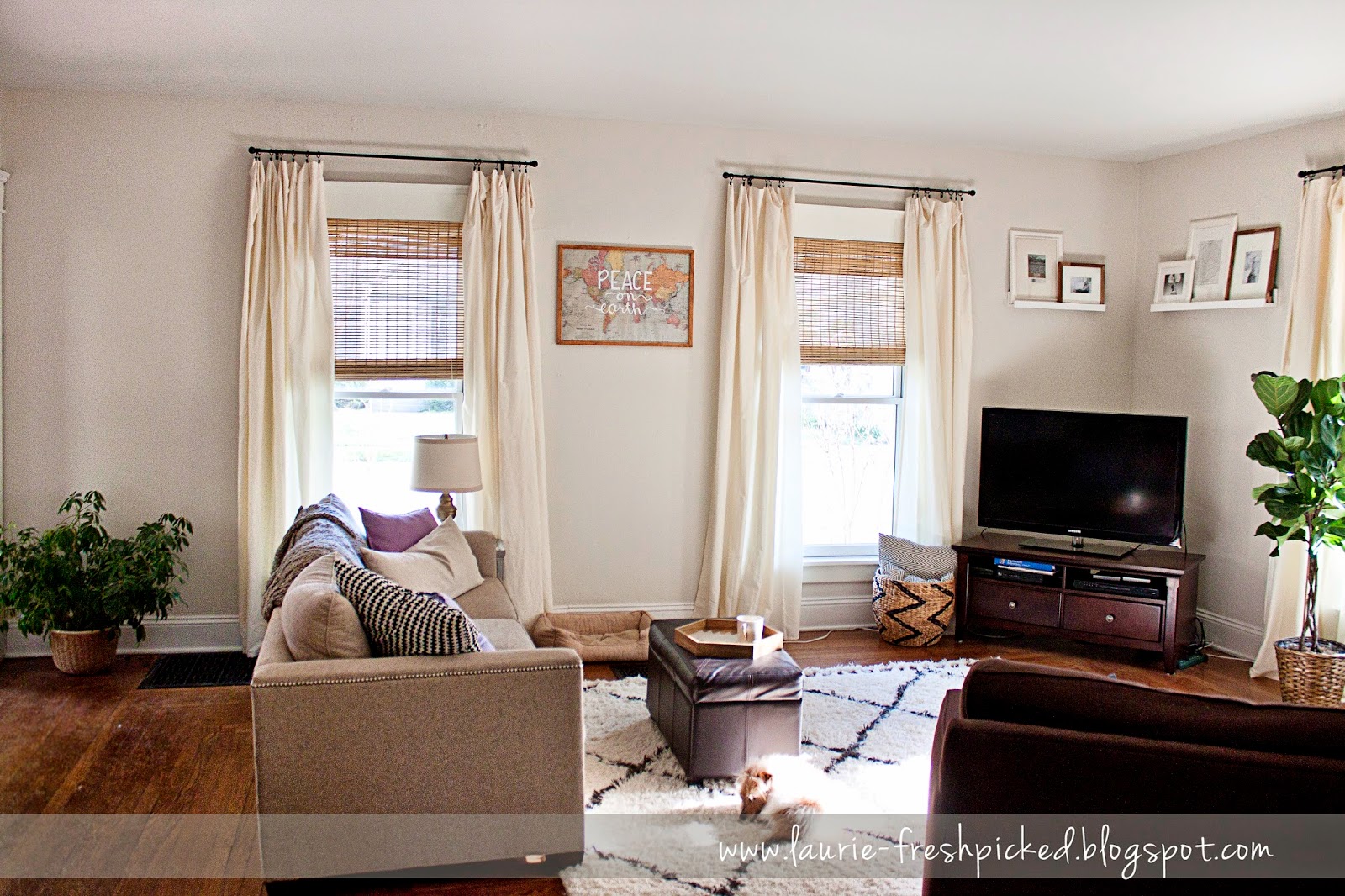 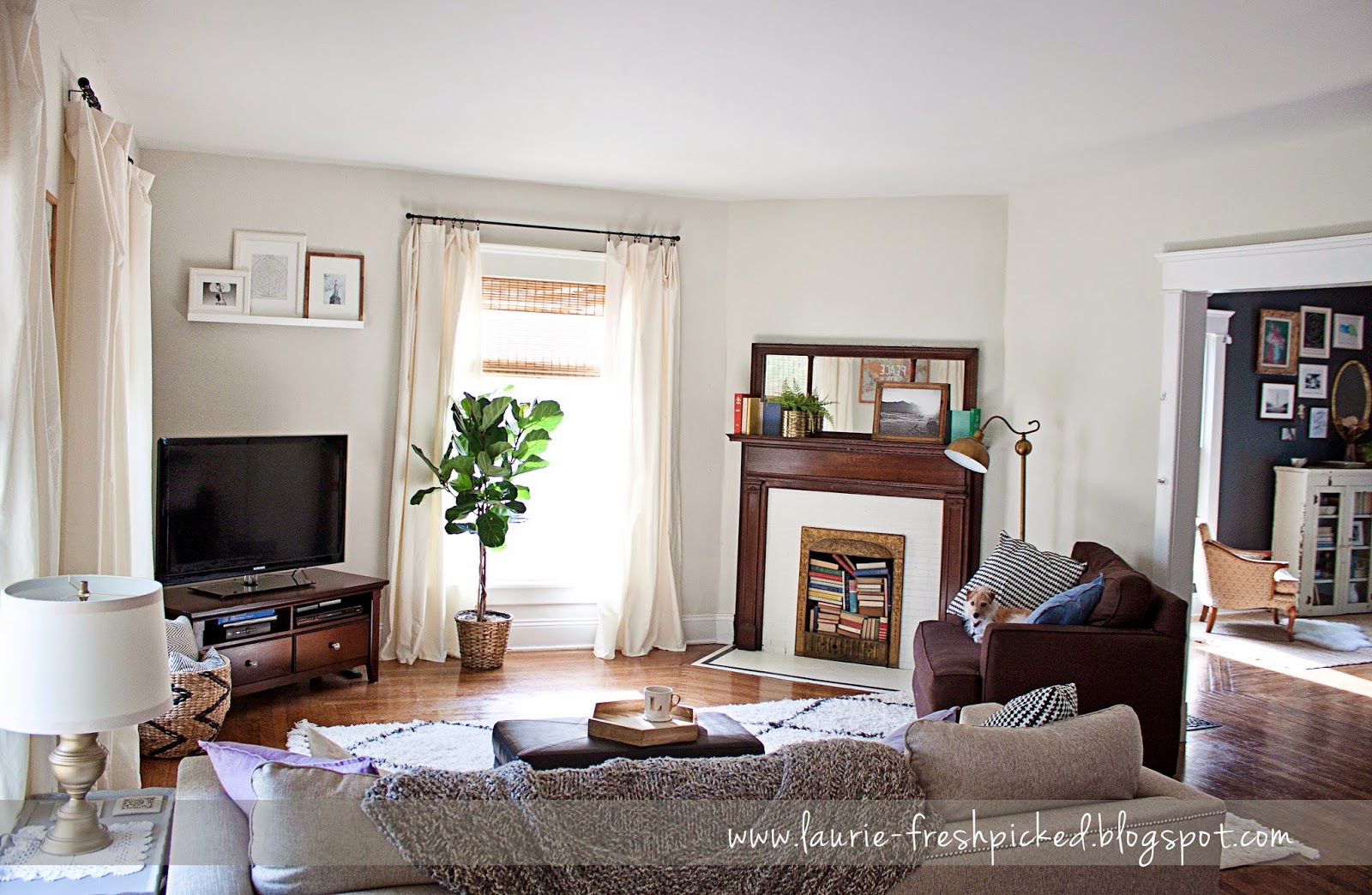 A few things about the room in general: the paint color is called Oyster White by Sherwin Williams, the trim color {of what I have repainted so far} is a Benjamin Moore color called Simply White, all the hardwoods are original as far as we know - they could use a nice buff and smooth coat of polyurethane... but that's for a later day year.

First I'll mention the new rug... it's an 8'x10' rug that I bought online.  I was trying to mimic the look of the West Elm Souk Wool Rug, except I was not trying to mimic the price tag of $899!  I found a good deal on rugsusa.com during a 70% off sale and landed on the Marrakesh Shag Natural Rug.  The website was also offering free shipping, so I got a great 8'x10' rug for under $300. I'm really happy with the rug, it does shed some, because it's wool, but with occasional vacuuming it does really well.  I also really like the braided detail on the ends. Lola likes it too :) {You'll notice she made every attempt to get in my pictures in this post} 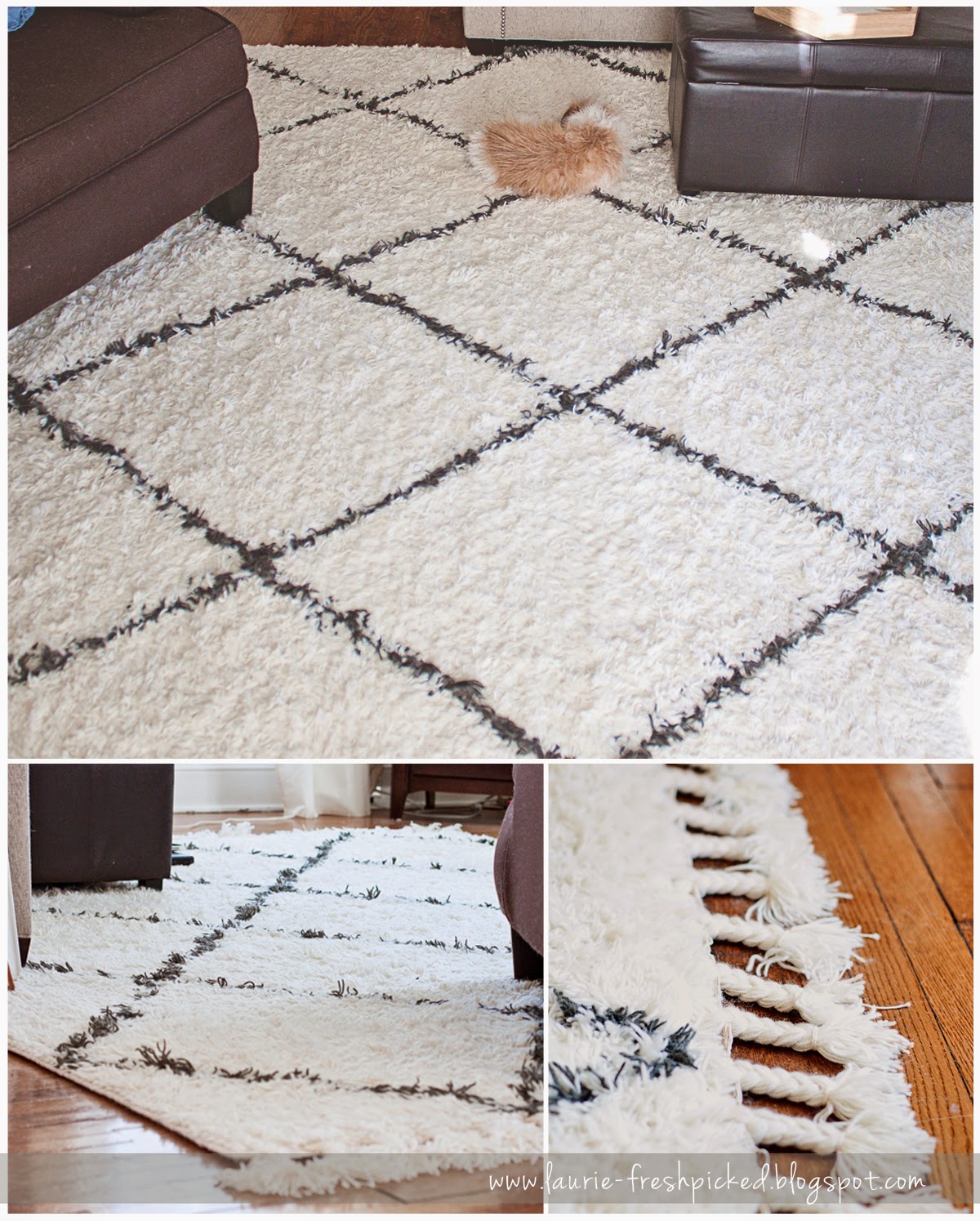 Next up the window treatments.  The woven blinds I ordered online {you think I could have lowered them to the same height to take pictures, huh? guess not...}.  They are called Petite Rustique Bamboo Roman Shades from overstock.com.  I thought I would be able to find them locally but Home Depot did not have the right color I wanted and Lowe's did have the right color, but it was their top of the line brand and were a little more expensive per shade than the ones I ordered.  They also come in several varying widths which was great, because in our old home the widths of the windows aren't always the same. I also got free shipping since my order was over $50. 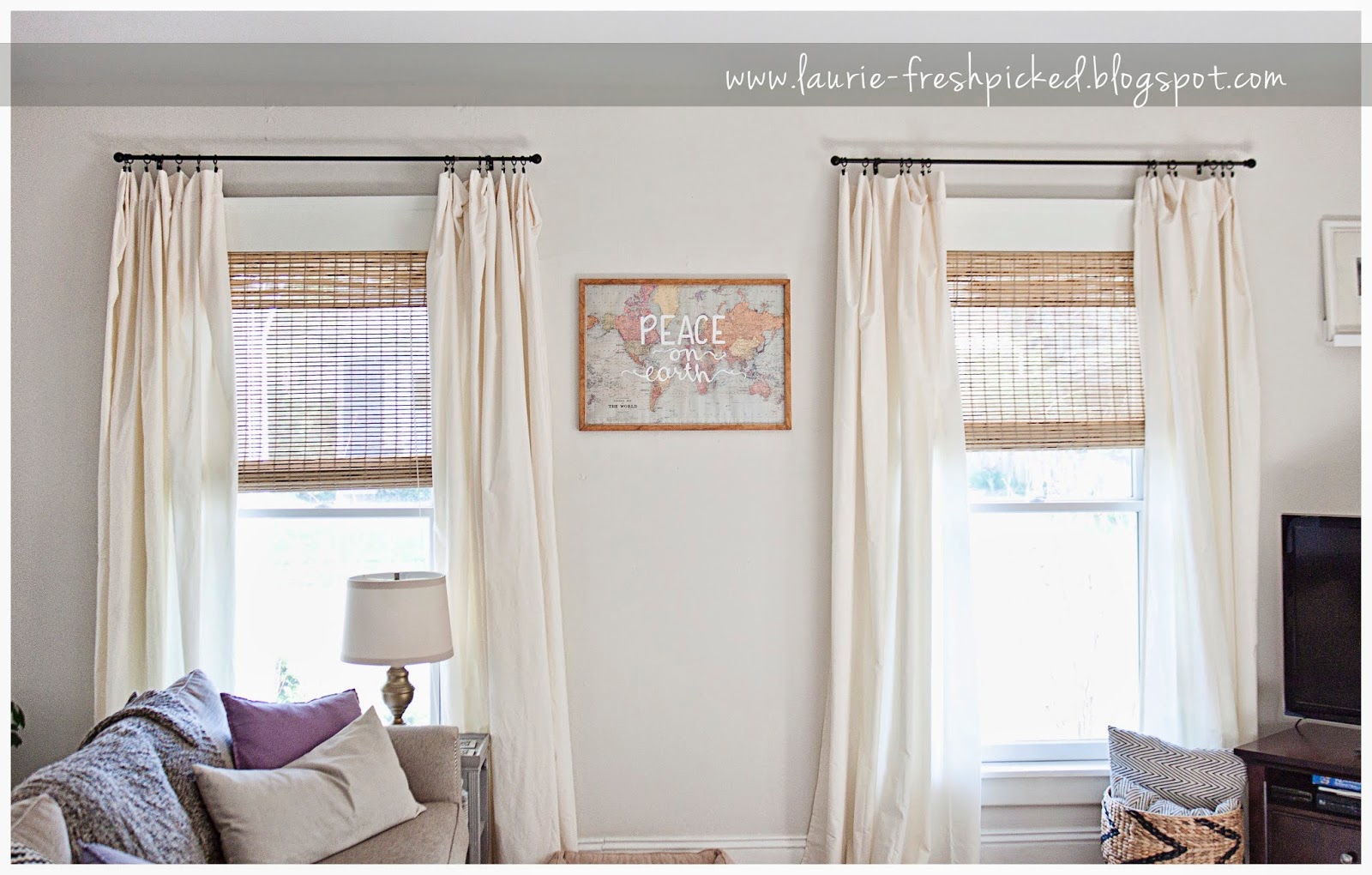 These shades are not lined, so you can still see through them at nighttime with lights on in the house, but that's what the curtains are for.  They still let it good light during the daytime, making the living room have great light and still some privacy.  I wouldn't recommend getting these for a bedroom though - I'd definitely consider lined ones to ensure better privacy.  Lined shades just equal more money, so for the living room this was perfect!
Now the curtains... well they aren't actually curtains. They are bedsheets.  I'm sure some interior designers that don't read my blog just passed out... but who can beat "curtains" for $9.99 from Target??? I have friends that do this too, so I feel pretty good about it, I'm not alone! {Shout-out to Mel!} They are ivory twin sheets from Target's Threshold line.  They are the perfect length too!  The curtain hardware is also from Target, all in a black finish. 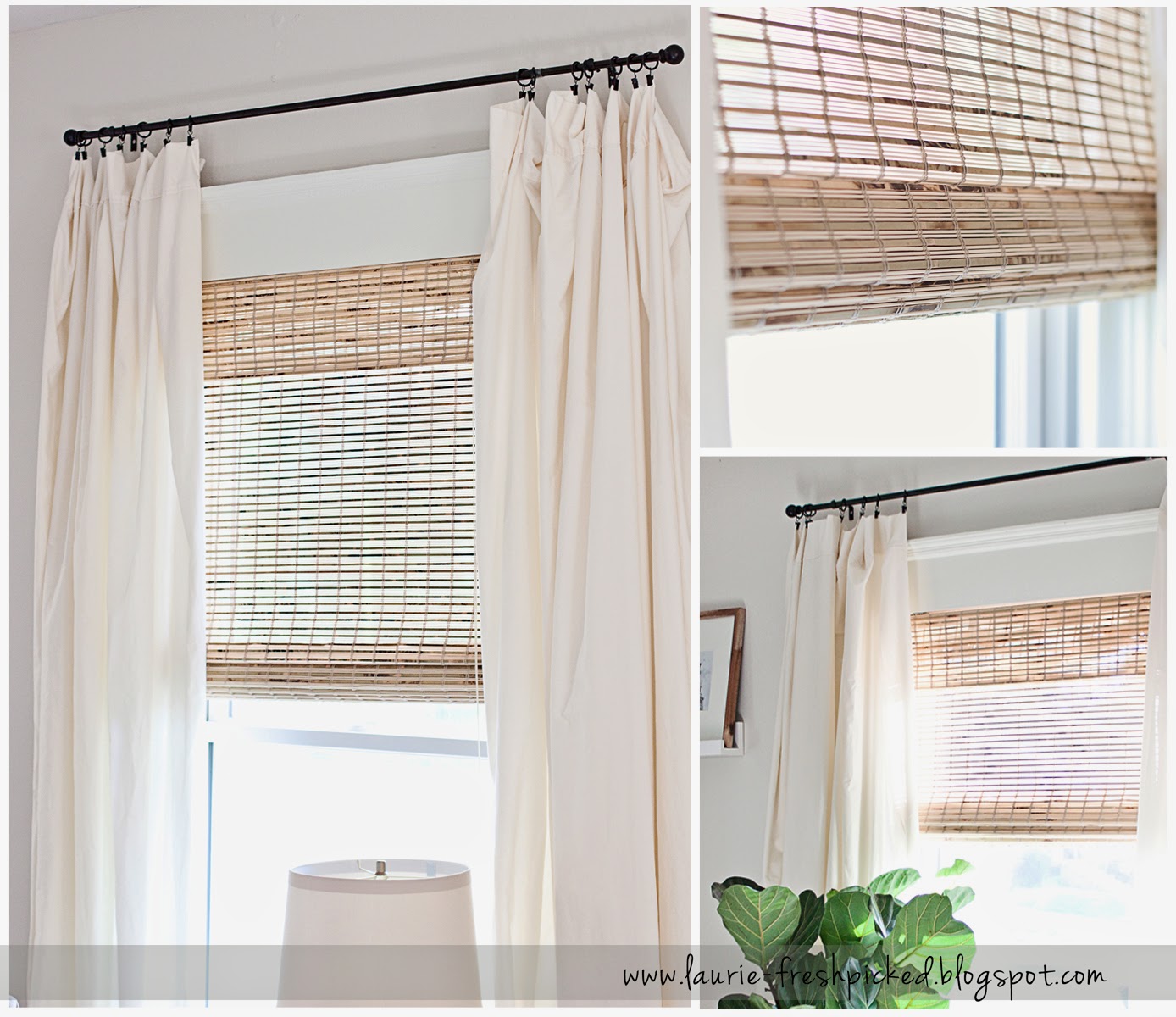 Next my beautiful, little Fiddle Leaf Fig tree.  Isn't he so cute?!?  I found him at my local florist shop, just happened to stumble upon him after wanting one for quite some time.  I got him as a really mature tree for $60, which I think is a pretty good price.  He has a braided trunk with three separate trunks.  I like him a lot.  I think someday he needs a cooler basket to sit in. 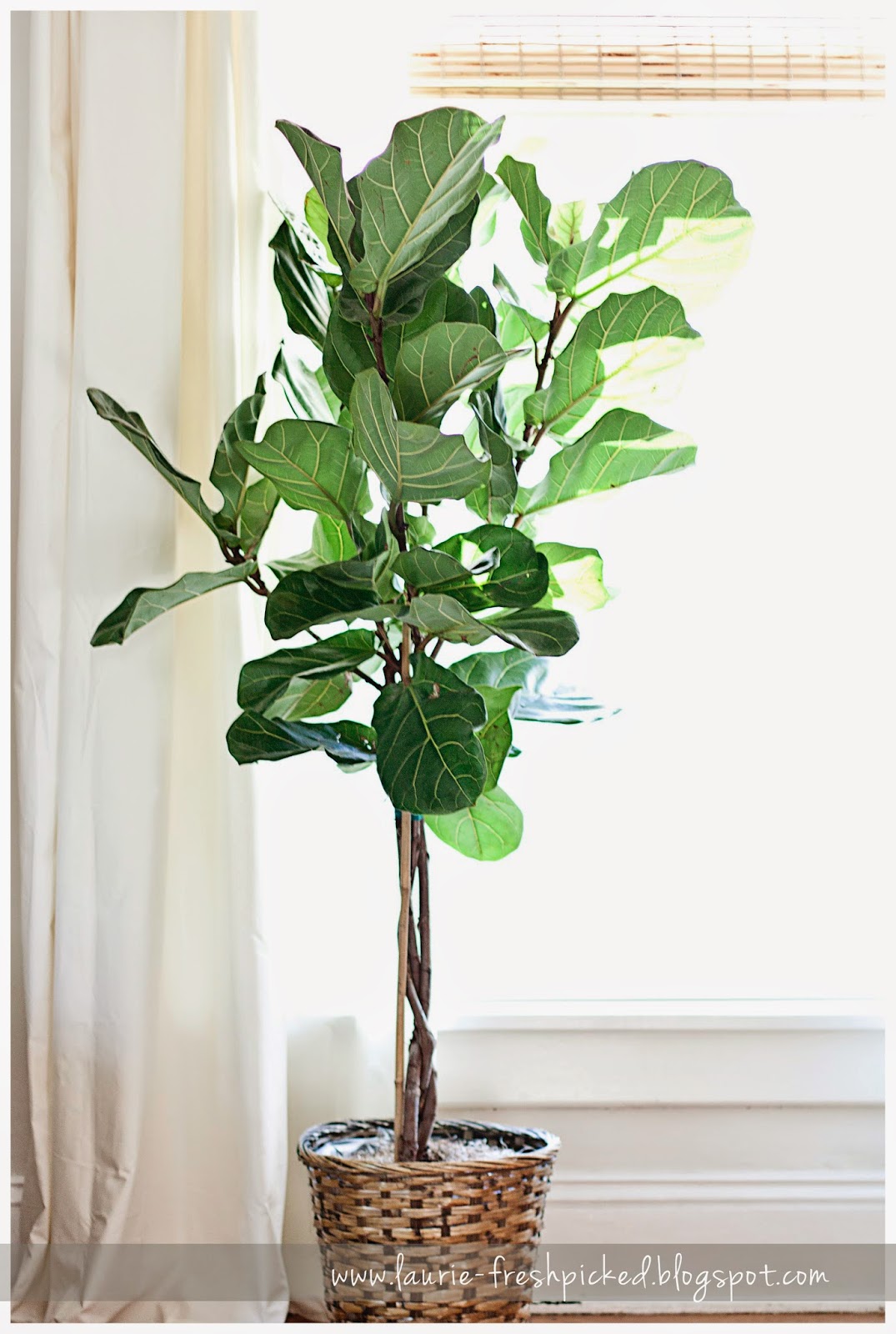 In the corner above the TV I have two picture ledges from Ikea.  I had these in my old house in my living room. The frames are from a mix of Target and Ikea.  I still need to fill the one frame with a picture. :)

The TV stand is from Target and we got it when we got married {almost six years ago!}, and I'm pretty sure Target sill sells the exact same one.  I've actually had my eyes out for an antique or maybe a good thrift find that I can refinish to replace this one.  It works for now but I'd like something with a little more of a furniture look to it. 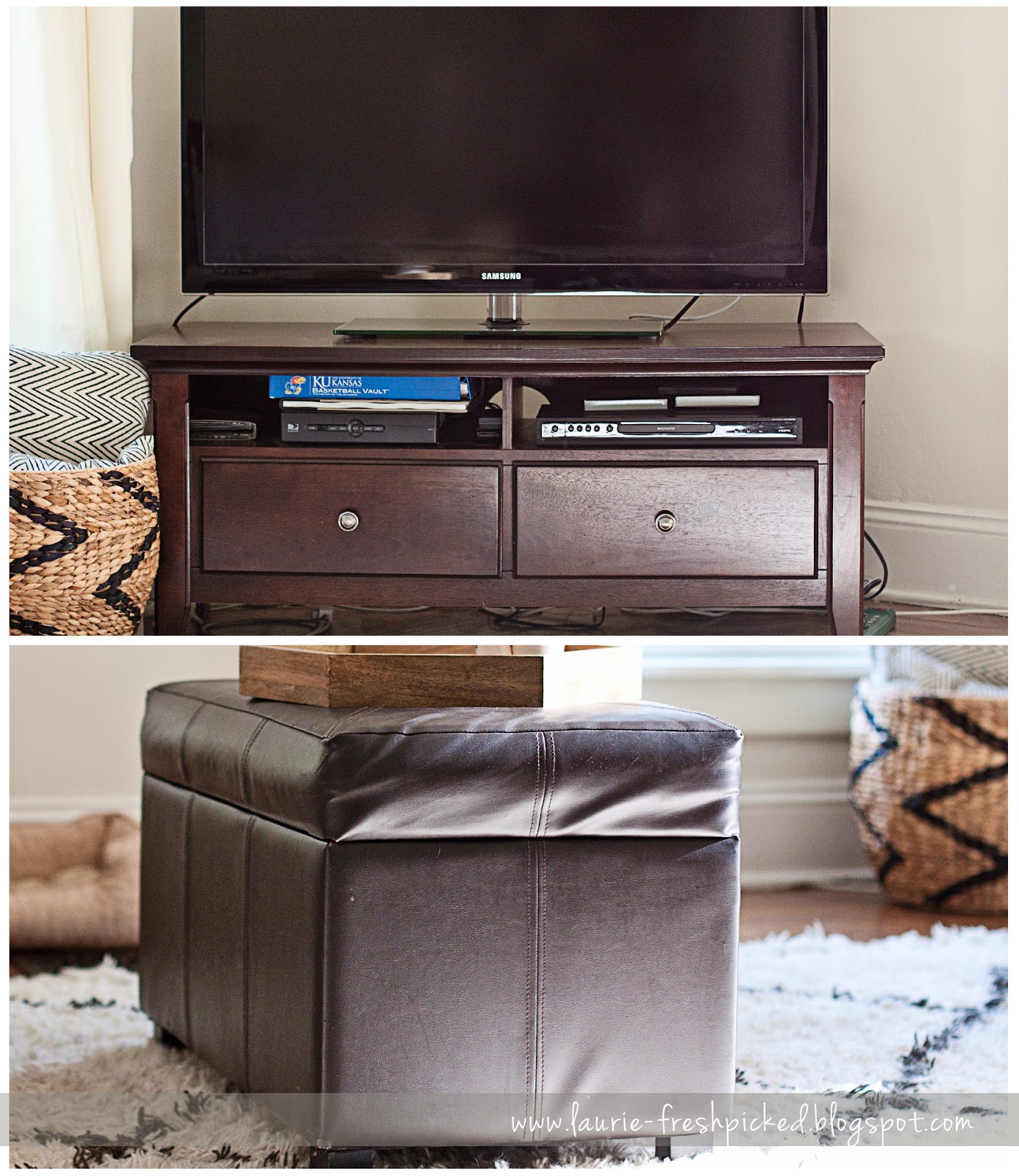 This ottoman is also from Target and they also still sell it. :) It is also from six years ago and has seen better days, but serves its purpose.  I'd really like to replace this with a trunk but I have been unsuccessful at finding one the right size in the right price range so far.

The basket is one I found in the Target clearance section several months ago, it's from the Nate Berkus line and there are currently ones just like it with slightly different designs.  The wooden tray is also from Target, I got it around Christmas time last year.  The mug was a Christmas gift and it from Anthropologie.

The couch is the same couch from our old house.  I got it a few years ago from the Nebraska Furniture Mart clearance room, score! The crocheted throw on the back of the couch was a handmade wedding present.  The purple and blue pillows in the room are all old and from West Elm.  The black and white pillows are from Ikea, as well as the natural colored lumbar pillow. 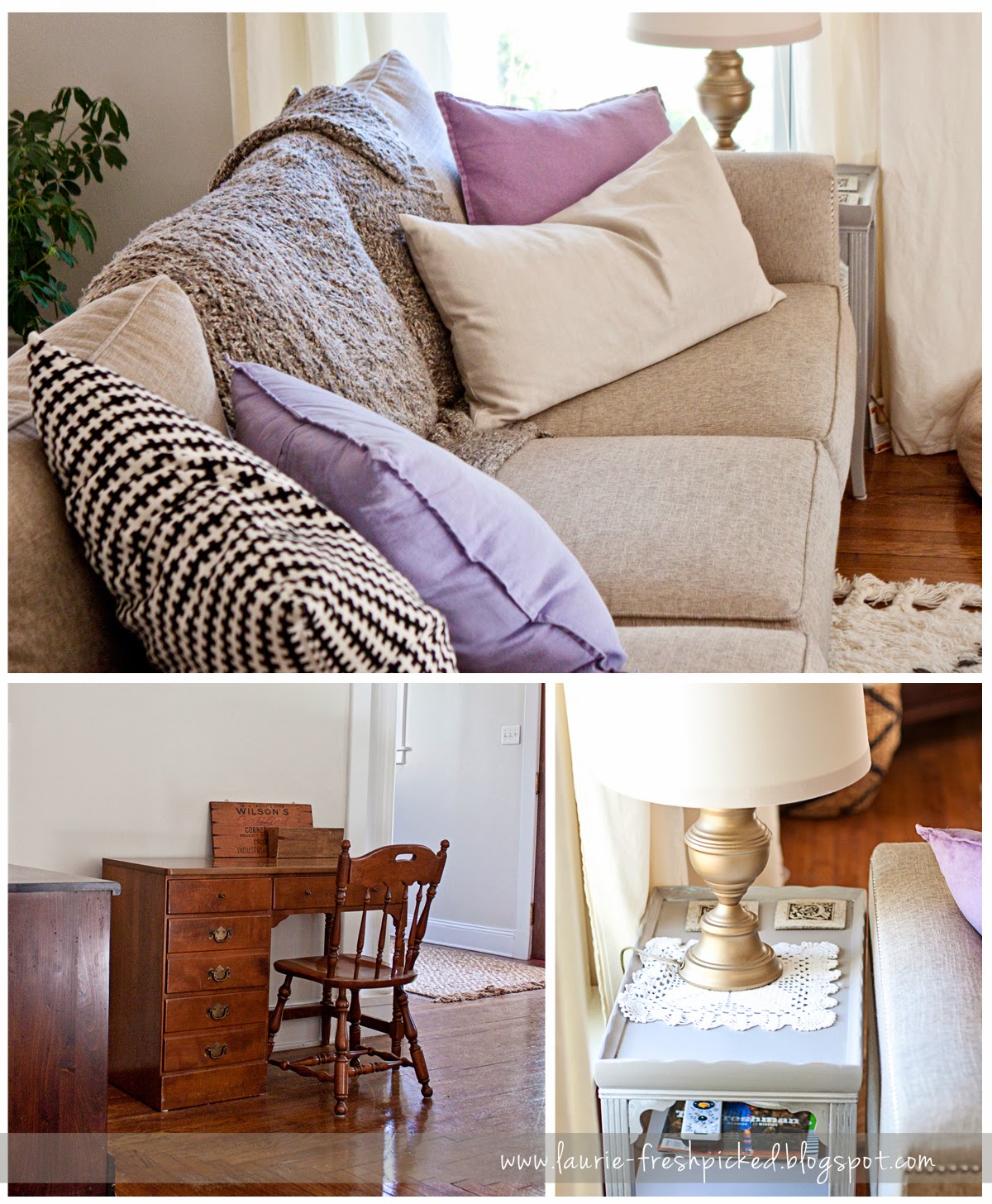 The desk in the back corner is very old, it is an Ethan Allen piece that used to by my dad's when he was young.  The little gray end table is something I got since we moved in.  It's from a local antique store.  I really love the scallop detail on the top edge. The gold lamp is old, it's thrifted and spray-painted.

This brown chair is from Nebraska Furniture Mart and was also something we got right after we got married.  It's a chair and a half, which I like, but the quality of the fabric is pretty poor. The stuffing from the cushion underneath is starting to poke up through the fabric and it just looks kinda ugly. At first I was ready to blame Lola for shedding on the chair, but then I realized it wasn't her fault. {Also, I could have straightened up these pillows for this pic... looks frumpy...whatever} 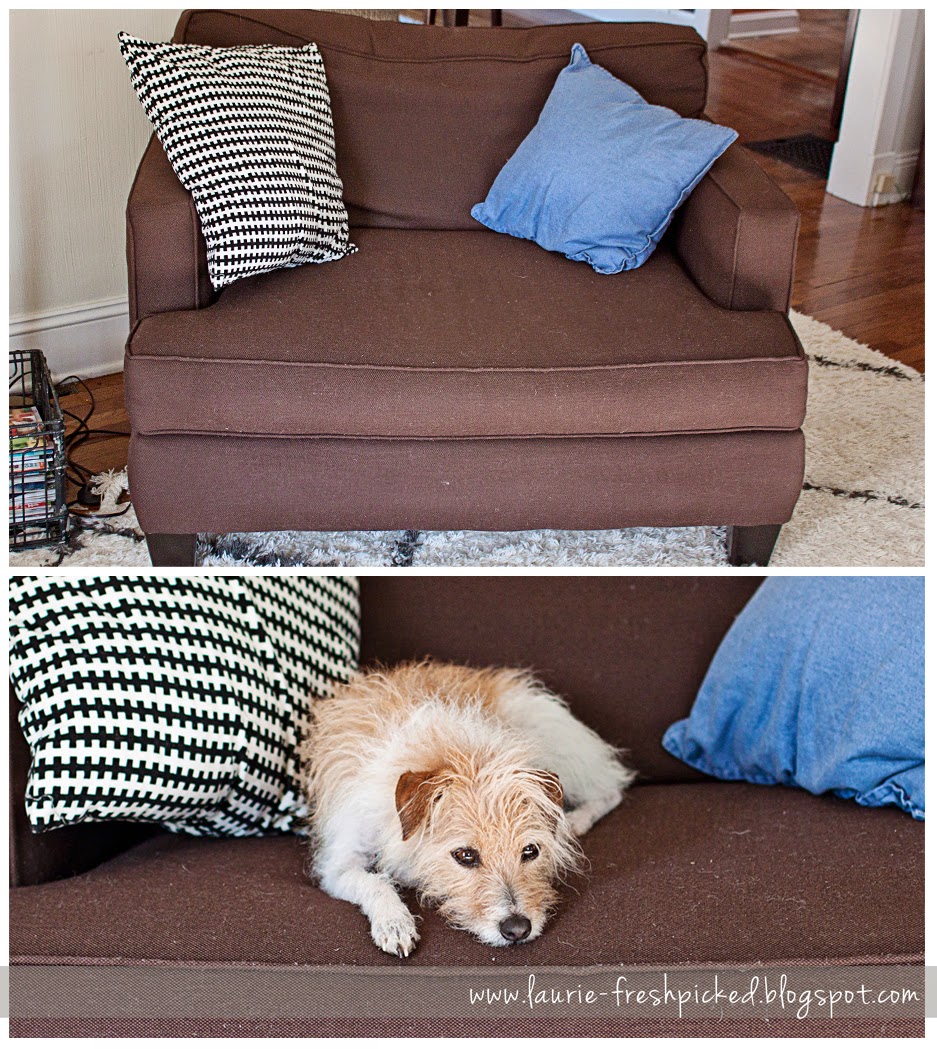 Although this chair is one of her top spots to lounge... but see all that fuzzy grossness on the chair??? Believe it or not, that's not her fur! It's just crappy fabric.

I already posted about the open shelving we added here, but I'll point out a few new things in this area anyway.  The gold magazine holders are new from Target, love them! The little clamp light was $6 from Lowe's and I spray-painted it with a a light blue and gold.  I put an extra Edison light bulb I had around in it. I think it turned out pretty cute! Moral of the story... I get a lot of stuff from Target. And I'm super pumped about Ikea and West Elm coming to Kansas City! More to come on the house... eventually... :)

Email ThisBlogThis!Share to TwitterShare to FacebookShare to Pinterest
Labels: before and after, home design, home tour 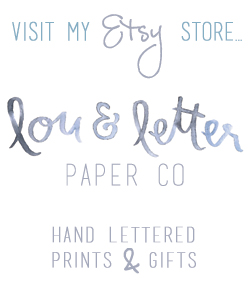 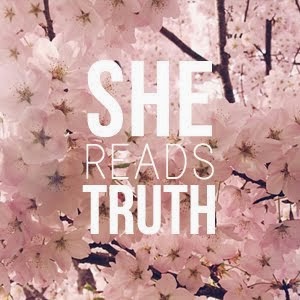